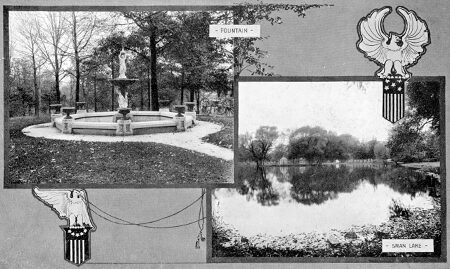 Local manager E. B. Wolcott, who supervised the initial development of the Northwestern Branch, described its prominent site as ‘beautifully undulating,’ with brooks from springs through the valleys.(113) The grounds were enhanced by the work of Thomas Budd Van Horne, a landscape gardener and former army chaplain chosen by the Board of Managers.

Van Horne also designed the grounds of the Central Branch in Dayton, Ohio, and during his service in the army had planned military cemeteries at Chattanooga, Tennessee, and Marietta, Georgia. The plan for the Northwestern Branch used the Main Building, placed on the property’s highest point, as a focal point. The curving, tree-lined roads and paths, manicured lawns, formal flowerbeds, and four small artificial lakes combined and contrasted with the natural rolling, wooded environment. Land to the north and east was used for farming, supported by a collection of farm buildings. By 1876, Milwaukee residents and tourists from further away could reach the branch by rail, take boat rides on the lakes, enjoy dancing at a dance hall, and listen to outdoor concerts given by the Home band. (114)  Julin,  NHDVS

From Out at the Soldiers’ Home: A Memory Book

It was a very sightly world. The gently rolling country of southern Wisconsin gave an opportunity to put various groups of buildings well out of sight of one another; and all that lay beyond the gates of the Home was shut off from the view of the inhabitants. What a sweep of snow lay across those hills in winter! And how austerely beautiful were the stark shapes of the bare trees, outlined against the gray December sky!

Native forest trees grew on all the knolls: oaks, hard maples, choke-cherries, pines. In almost every field was that most beautiful and graceful of all “shade trees,” the solitary elm. Every spring wild crab-apples turned to mounds of pale pink which scented the air all around with their fragrance; the thorn-apple was just as beautiful, though it was more wisely enjoyed from a distance.

This background had been “improved” into the prettiness of a Victorian lithograph. Every twenty feet or so along the winding roads were carefully selected and planted stones, always gleaming with fresh whitewash. Lawns green and smooth as a golf course were broken by large round beds of “ornamental foliage plants,” rising to castor-oil bushes in the center. On several gently sloping banks about the Grounds was a touch to remind visitors where they were: GRANT or SHERMAN or SHERIDAN would be spelled out in tiny green-and-crimson coleus plants. And since sailors as well as soldiers were admitted to the Home, if they had been proper volunteers and were duly disabled, the navy received its recognition in a growing FARRAGUT.

There were four artificial—or at least assisted—ponds on the Grounds; willow trees grew along the banks of all of them. On the placid and slightly stagnant bosom of the largest pond pairs of swans floated, and flocks of tame ducks, and gaily painted rowboats.