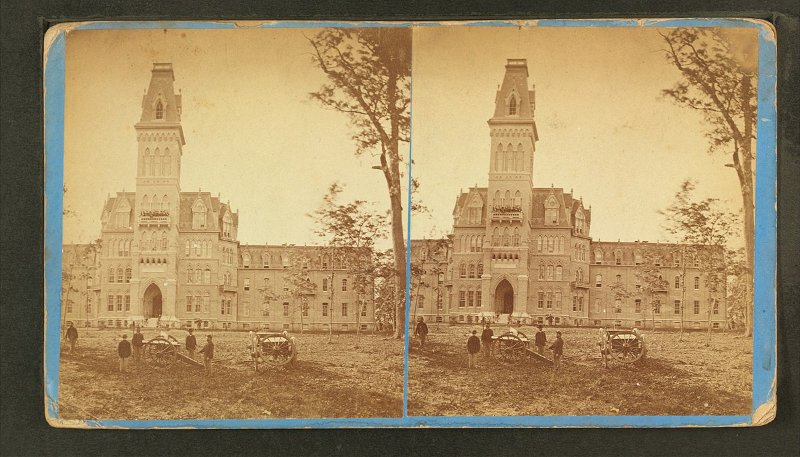 The very first chapel was in the back (west) wing of Old Main, on the second floor above the dining room. The construction of Old Main (1867 to 1869) experienced considerable problems with cost overruns, which resulted in the Board of Managers stopping the project before all parts of original design were built.

When the Board ordered the creation of a chapel and assembly hall on the second floor over the dining hall, Dr. Wolcott, the local Manager, was the only dissenting vote and was ordered to fulfill the Board’s decision. By 1889 admissions at the Home had increased dramatically. To provide more dormitory space in Old Main, a separate chapel building was constructed at a cost of $9,000. The Chapel was paid for with “Post Funds,” money accumulated from sales of products made or grown at the branch and from sales at the Home Store.

The contract for the construction of a wood frame chapel was awarded to Henry C. Koch, a Milwaukee architect, who designed more than 300 buildings from 1870 to 1910. The 7,000-square-foot building is essentially the shape of a cross, with several appendages. Koch designed the Chapel primarily in the Shingle Style, shown by the steep roof with multiple gables, dormers, and turrets.

Koch’s work at the Soldiers’ Home in the 1880s demonstrated a break with pre-Civil War styles and a willingness to work in new contemporary styles. His work on public projects distinguished him from the other architect of several Soldiers Home buildings, Edward Townsend Mix, who was patronized primarily by private clients. Koch’s designs are very straightforward and utilitarian, without the elaborate stylistic features that can be seen in Mix’s work.

The Chapel opened for use on September 22, 1889, as a multi-denominational worship space with seating for 600. A special chancel was designed with the furnishings for Catholic services, and a separate altar was designed with the appointments for Protestant worship. Most of the stained glass windows have dedicatory insets near the bottom in memory of the various families and individuals who donated money to the Chapel.

According to an 1893 report written by Richard Corbett, chief clerk:

…clergymen of both Protestant and Catholic denominations hold services there several times a week. Sabbath School was held every Sunday for the children living in the neighborhood of the home. The Chapel is heated with steam and lighted by electricity. It contains a large organ and has a magnificent bell, both gifts of kind friends in the city of Milwaukee. Flowers for the altar come from the greenhouse on the grounds. The chapel seats approximately 600 people in oak pews. Usually the Governor, treasurer, officers, and civilian employees occupied the right half of the nave, while the Home members sat in the left half.

Read the 1890 report of the Chaplains of the Northwestern Branch here.

Richard Corbett’s daughter, Elizabeth, also described the Chapel in her book, Out at the Soldiers’ Home:

Church was quite as much fun as the theater, in a somewhat different way….The children couldn’t always expect such good luck as the day when the Governor’s two dogs came to church and trotted proudly across the chancel right in the middle of the sermon. And of course it was great fun, too, that Easter Sunday when the collection was particularly heavy, and Charley the Painter upset the plate and had to scramble around under the pews retrieving his half of the collection….When the Quartermaster settled himself for the sermon, he regularly went to sleep. As soon as he fell asleep, he began to snore; and he was a good loud snorer.…

This lovely Chapel served the residents of the Home and the greater Milwaukee community until 1996, when all services were transferred to the chapel in the main hospital.

Back to Building Index