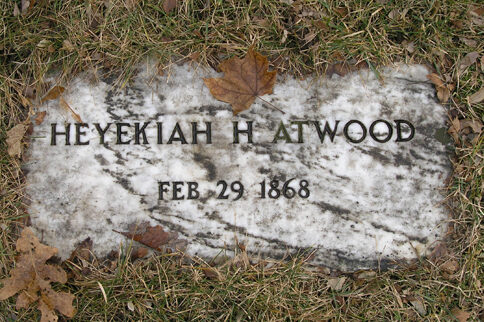 The Home Cemetery at the Northwestern Branch did not open until 1871. Prior to that time, many members of the Home were interred at Forest Home Cemetery, one of Milwaukee’s great Victorian cemeteries. Several of the plots had already been dedicated to the Union dead by the Lady Managers of the Wisconsin Soldiers’ Home. Map of sections related to the Wisconsin Soldiers’ Home and National Home

The funeral expenses, in most instances, have been paid and the remains forwarded to the homes of the deceased, in charge of the Superintendent or some responsible person. When friendless, the ladies have stood by them, until the last whisper had ceased, as by those to whom they owed a debt which no human tongue could tell. They were borne to honored graves in our beautiful “Forest Home” – followed to the last by some of the ladies. They rest in hallowed ground, belonging to the Wisconsin Soldiers’ Home, which is forever set apart to the ashed of heroes.

Many of the Wisconsin Hundred Days Regiments, returning from service in Memphis in the summer of 1864, were brought to the Soldiers’ Home in Milwaukee. Several men from these regiments – the 39th, 40th, and 41st – are buried at Forest Home Cemetery.

The Home has been enabled, by the generosity of the Trustees of Forest Home Cemetery, to purchase for a nominal price, four lots in said Cemetery. These are neatly sodded, and in the centre is erected a monument, presented to the Home by Moffatt & Eccles. All soldiers buried from the Home have been interred here, and a neat headstone marks each grave.

Forest Home Cemetery has no record of the monument mentioned in this report. We are still searching for descriptions and photographs.

Heyekiah (Hezekiah) H. Atwood was one of the soldiers transferred from the Wisconsin Soldiers’ Home to the National Military Asylum (NHDVS) in May 1867. Atwood had served one year and three days as Fife Major with the 23rd U.S. Infantry in the War of 1812. He was 88 years old when admitted to the National Home and suffered from general debility (senility).

One of the burials from the Northwestern Branch prior to the opening of the Home Cemetery. 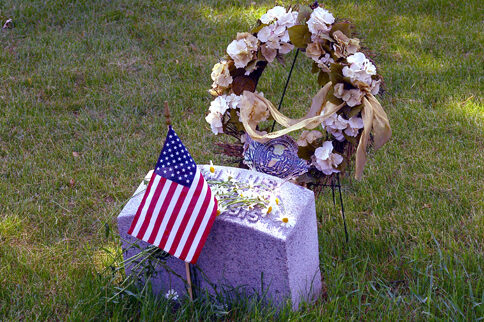 Cornelius Wheeler, veteran of the Iron Brigade and Governor of the Northwestern Branch, 1891-1914, is buried in “Lawn Place” at Forest Home Cemetery. 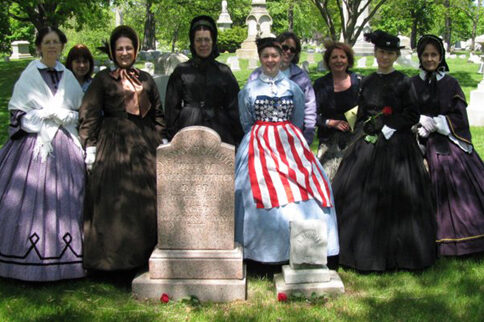 In 2007 the West Side Soldiers Aid Society revived the tradition of visiting and decorating the graves of Union soldiers buried at Forest Home Cemetery. Members and friends (above) gather at the grave of Lady Manager Fanny Burling Buttrick who is buried near the Van Vechten plot in Section 32.