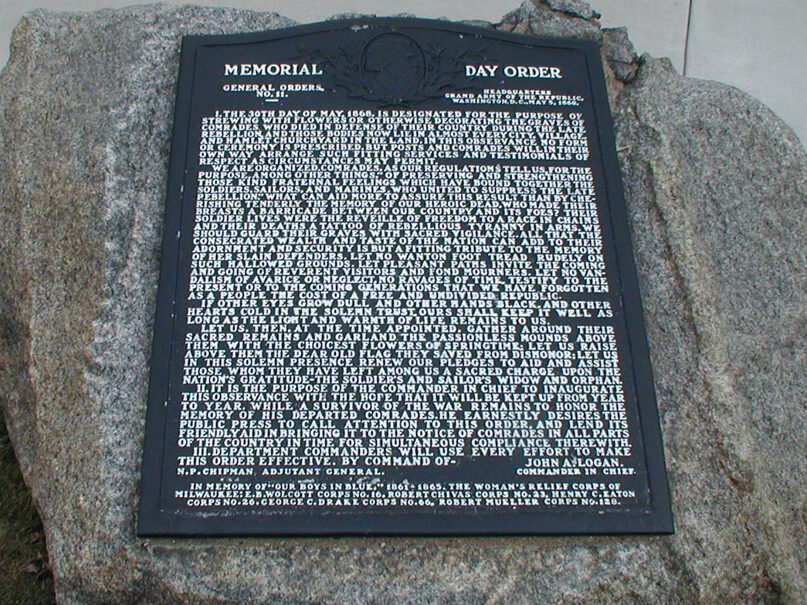 On May 30, 1868, Commander-in-Chief of the Grand Army of the Republic Gen. John Logan (pictured at left) ordered  that this day be “designated for the purpose of strewing with flowers, or otherwise decorating the graves of comrades who died in defense of their country during the late rebellion, and whose bodies now lie in almost every city, village and hamlet churchyard in the land.”

Even before the opening of the Home Cemetery in 1871, Memorial Day was observed at the Home and at cemeteries throughout Milwaukee with the solemnity befitting the day. The Home’s commemoration of Memorial Day soon became one of the key observances in Milwaukee and remains so today.

Years after leaving the Home for an author’s life in New York City, Elizabeth Corbett shared this poem on the quintessential American holiday.

May 1956
Poem for Florence Markus, VA Librarian, and “the Comrades”

Memorial Day is drawing nigh;     It takes me back through the years To those good old times at the Soldiers’ Home     (A place which had few peers), To bridal wreath and lilacs,     And ranks of marching men…

The Memorial Day Order plaque, located near the Cemetery Round House and Memorial Platform, was donated in memory of the “Boys in Blue” by the Woman’s Relief Corps of Milwaukee, E.B. Wolcott Corps No. 16, Robert Chivas Corps No. 23, Henry C. Eaton Corps No. 26, George C. Drake Corps No. 66, and Robert Mueller Corps No. 128. [Corps refer to posts of the Grand Army of the Republic.]

Read a Milwaukee Sentinel report on Memorial Day 1879 at the National Home and at Forest Home Cemetery.