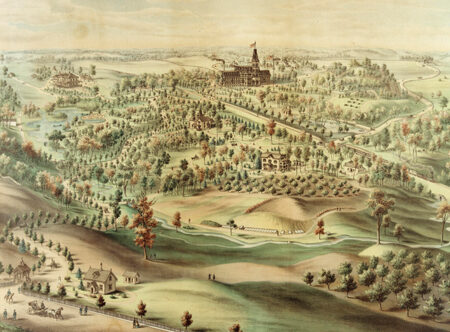 During the Civil War, women who formed the Wisconsin Soldiers’ Home Society worked to provide care and transitional housing to returning Civil War veterans in Wisconsin. As the war drew to a close, the membership of the Society began planning for a more permanent structure. A fair organized to raise funds for the purpose realized more than $100,000, and by the fall of 1865, the Wisconsin Soldier’s Home Society was able to purchase land and begin planning for construction of a state soldiers’ home. (110)

The following year, George Walker, a member of the reorganized National Home for Disabled Volunteer Soldiers Board of Managers, proposed that the Wisconsin group turn over their resources to the NHDVS in order to help gain location of a branch in Milwaukee. Although they believed a state institution might be more responsive to the soldiers’ needs than a national one, the members of the society somewhat reluctantly agreed to dedicate their funds and their land to the NHDVS. Subsequently, the Board of Managers decided to locate the Northwestern Branch in Milwaukee, and it was established west of the city on a rolling tract of land of about 400 acres that included trees and water features. The Branch initially used existing buildings to serve the early members, who numbered 183 during the first year. (111)

Milwaukee architect Edward Townsend Mix designed the first structures built under the Board of Managers’ administration. The branch’s five story, multi-chromatic Gothic Revival style Main Building, constructed on the site’s highest elevation, was designed to hold administrative, domiciliary, and medical functions, dining facilities, and a chapel and meeting hall, as well as a laundry and bath rooms. The Main Building was a striking and highly visible addition to the landscape. Three gatehouses allowed access from three points on the grounds. The core road system would remain essentially unchanged over the years.

A bird’s eye lithograph dating to 1867-1878 confirms the dominance of the Main Building over the campus, which also included the governor’s residence and another home. Cost overruns slowed the construction of the Main Building and until the mid-1870s, the massive structure was poorly ventilated, inadequately heated, and inconvenient for disabled veterans, problems that had to be remedied in order to create a comfortable environment for the members. As the Northwestern Branch developed, the Board of Managers utilized the more decentralized plan followed in other branches: single purpose buildings, including barracks, a hospital, a headquarters building, and an assembly hall were built beside and behind the Main Building. Several of the buildings were designed by architect Henry C. Koch, whose designs reflect his interest in practicality and budget.

By the 1890s, facilities included a library, a post office, a powder house (to store explosive materials), a recreation hall, and a Ward Memorial Theater. The theater was built with funds bequeathed to the NHDVS by Horatio Ward. In 1892 the Milwaukee Railway Company built an elevated, Queen Anne style depot near the main entrance for their electric streetcar line. A circa 1890 bird’s eye lithograph illustrated a proliferation of buildings on the campus set within a maturing picturesque landscape. (112)

Local manager E. B. Wolcott, who supervised the initial development of the Northwestern Branch, described its prominent site as ‘beautifully undulating,’ with brooks from springs through the valleys. (113) The grounds were enhanced by the work of Thomas Budd Van Horne, a landscape gardener and former army chaplain chosen by the Board of Managers. Van Horne also designed the grounds of the Central Branch in Dayton, Ohio, and during his service in the army had planned military cemeteries at Chattanooga, Tennessee, and Marietta, Georgia. The plan for the Northwestern Branch used the Main Building, placed on the property’s highest point, as a focal point. The curving, tree-lined roads and paths, manicured lawns, formal flowerbeds, and four small artificial lakes combined and contrasted with the natural rolling, wooded environment. Land to the north and east was used for farming, supported by a collection of farm buildings. By 1876, Milwaukee residents and tourists from further away could reach the branch by rail, take boat rides on

the lakes, enjoy dancing at a dance hall, and listen to outdoor concerts given by the Home band. (114) As the population of the NHDVS declined after the turn of the century, growth at the Northwestern Branch slowed and in 1916, Inspector General W. P. Jackson suggested that the branch close. He noted that the Northwestern Branch was the NHDVS facility most in need of expensive repairs and renovations, and its members could easily be transferred to other branches. The onset of World War I and the subsequent movement to develop additional medical facilities for veterans, however, forestalled consideration of such action.

The Northwestern Branch received a new tuberculosis hospital sited at the southern boundary of the property, a location far removed from the remainder of the campus. Nearby were three new employees quarters. The existing hospital was updated, a greenhouse constructed, and two additional quarters for medical staff built at the northern end of the campus during the 1920s. At the end of the 1929-1930 fiscal year, the Northwestern Branch was 382.25 acres in size and held seventy-one buildings: six barracks (one veneer and five brick), two brick hospital buildings, and sixty-three other buildings, sixteen of which were brick and forty-seven frame. No farming was underway at the branch by this point. In the last year of its existence as an NHDVS facility, the unit served 7313 veterans.

After the transition to the Veterans Administration, a new hospital was constructed at the former Northwestern Branch. Completed in 1933, the facility was located south of original buildings, as were other major building projects in the 1960s and 1970s. With the construction of the Milwaukee County Stadium (1953) at the northwest corner of the campus, the Northwestern Branch’s historic boundary was reduced. (115)

The architecture of Northwestern Branch helps to illustrate its development. The 1879 Italianate, pavilion plan hospital reflects the branch’s decentralization. A Queen Anne style fire engine house, a brick and frame Queen Anne governor’s residence and the exuberant polychromatic Queen Anne Ward Memorial Theater from this early development period also survive. Twelve major buildings from the subsequent 1884-1900 expansion period are present, including two Italianate style barracks buildings, two neighboring Classical Revival style buildings—the Wadsworth Library and the Social Hall, the Shingle style chapel, private residences executed in the Queen Anne and Shingle styles, a steam plant and the headquarters building, a mix of Colonial Revival and Renaissance Revival style elements. The hospital, barracks, administration building, theater, steam plant and social hall were built in close proximity to the Main Building, while the private residences were located to the periphery. Six buildings from the 1901-1917 period remain, all of them quarters for chaplains and staff and built in a vernacular style with some Colonial Revival references. These quarters represent the expansion of medical staff in the early part of the twentieth century as the NHDVS facilities became increasingly focused on providing medical care. (116) 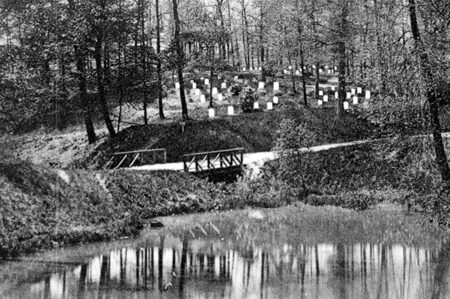 The Soldiers’ Home Cemetery, designed by Thomas Van Home, was established at the Northwestern Branch in 1871; prior to that time, the Home buried its soldiers in private cemeteries in the Milwaukee area. There are two sections of cemetery at the Northwestern Branch. The main section of the cemetery, about 36 acres, is west of the historic campus and physically divided from it by the railroad line, but clearly visible from the western area of the historic core. Another five acre section is west of the building complex. The cemetery holds a 1900 reception building and a 1928 comfort station. The granite Civil War Soldiers and Sailors Monument was erected in 1903 In 1937 the name was changed to the Wood Cemetery, in honor of General George Wood. In 1973, it became a National Cemetery. (117)

112.General Horatio Ward was a Virginia native who later became a London banker. The funds were to be used to erect recreational and cultural buildings and other amenities. Ward theaters were also built at the Western Branch and the Southern Branch. Halverson, et al., 8/43-47 51-56; Kelly, Patrick J.