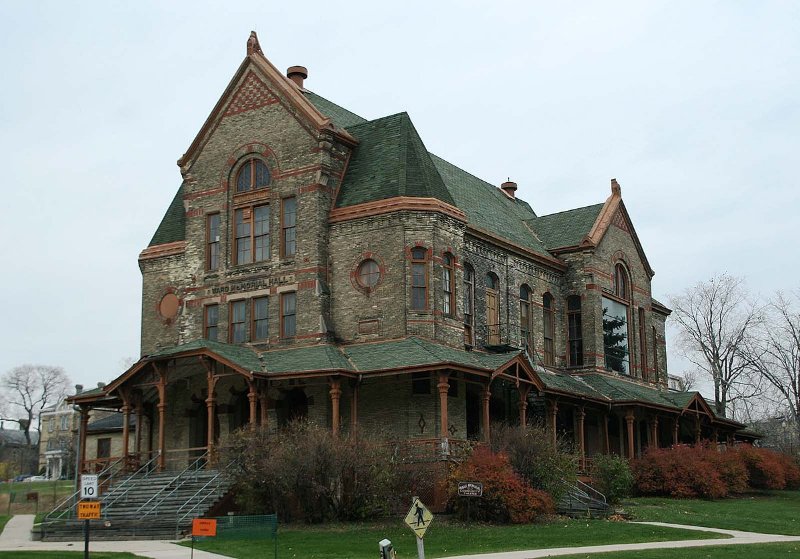 So you think you know Milwaukee? Bob Hope, Burns and Allen, Jack Benny, W.C. Fields, Will Rogers, Jimmy Durante, Eddie Cantor and Lillian Gish appeared at a theater in Milwaukee that is still in use. Can you name it? (It’s not the Pabst. The Pabst is just a kid compared to the “old lady.”) The “old lady” is Ward Memorial Hall on the Veterans Administration grounds…

Read more from this July 6, 1976, special to the Milwaukee Journal by Jeff Unger.

THE “WARD” OF THE WARD THEATER

The Ward Fund was significant for the projects it supported at most of the branches, particularly for the construction of theaters and cultural activity buildings. The fund came from the estate of Horatio Ward, a Virginia banker who had invested in an assortment of state bonds before the Civil War, and had moved to London at the outbreak of the war. He died in London in 1865, with a provision in his will, dated December 9, 1865, leaving approximately $100,000 in state bonds to the “National Soldiers and Sailors Home about to erected in Washington, D.C. After the will was probated in London in 1867, Henry B. Hammond, a lawyer in New York engaged by the Ward family to determine what charity Ward had intended to receive the funds, identified the National Asylum. The funds were transferred to the control of the Board of Managers in 1871, to fund activities that benefited the members of the Home; the board identified those as cultural activities, such as concerts, theatrical performances, and lectures. To support these activities, the board allocated funding from the Ward Fund for memorial halls. National Register Nomination

St. Louis Mo., Dec. 15. —During the 21st annual encampment of the Grand Army of the Republic, held here in September last, four very large Cathedral glass transparencies, two of them showing the likeness of gen. Grant on horseback, and two of them, the figure of Abraham Lincoln standing erect, were suspended at different street crossings and formed a conspicuous part of the city’s decoration in honor of that occasion. They were furnished by the general executive committee of arrangements and were paid for out of the generous contributions of the citizens at large for the entertainment of the veteran soldiers of the Union. Today the executive committee, after having them prepared for convenient setting as memorial windows, sent one to each of the national Soldiers’ Homes at Dayton, Milwaukee, Hampton and Leavenworth Ks, with letters addressed to the governors of each institution stating that they are presented by the committee on behalf of the citizens of St. Louis without distinction as to race or past or present political affiliations, to the national soldiers’ homes as souvenirs of the last annual encampment of the Grand Army of the Republic, believing that they will be prized by the present and future occupants of the homes, both on account of the soiree whence they come, and the likeness of the distinguished men which they bear.

Elizabeth Corbett remembered many afternoons at the Ward Theater:

When the posters had informed them that there was to be a show at the theater,” she recalled, “they began to line up at least an hour before the doors were scheduled to open. On very cold days Papa would send down word to have the doors opened ahead of schedule, to keep the veterans from freezing — with the inevitable result that the next time they lined up earlier still. If they hadn’t come until the doors were officially supposed to be opened, they would still have had half an hour to wait for the rise of the curtain. They waited, coughing even more than most audiences cough… However, the veterans did not seem especially impatient — until the curtain went up. Then all at once their time became extremely valuable to them. If the show failed to please, they did not linger in the hope that it might get better. They simply rose and left: not one at a time, but ten or twenty at a time. They did not wait until the end of a scene, nor even for the end of a speech. They tramped out and cheerfully faced an empty afternoon or evening. By the middle of they play, the actors sometimes had to continue to an almost empty house.

Out at the Soldiers’ Home: A Memory Book